She has studied Ikebana

Japanese flower arrangement since 1968 (more than 45 years), and Ikenobo

Ikebana in particular since 1973 (more than 40 years) under Prof. Kazu (Yoshu) Himeoka.

In April, 2008, she was admitted to and started to attend Ikenobo Central Training Institute

In March, 2011, she graduated from the Special Advanced Class of Ikenobo Central Training Institute (Ikenobo Institute) in Kyoto, Japan.

) rank, and the highest-ranked teacher of Ikenobo in Colorado, actively serving Ikebana International Denver Chapter (#66).
She annually attends the classes at Kyoto Ikenobo headquarters in order to sharpen her skills and to keep up with the latest topics taught at Ikenobo Kyoto headquarters, and teaches locally the most authentic Ikenobo method with the latest updated teaching methods taught at Kyoto Ikenobo School.

She is planning to go back to Ikenobo Central Training Institute

in Kyoto, Japan, in the near future for more advanced classes and the higher certificates.

Quote:
“I took about 100 of classes from different Ikenobo teachers both locally in Colorado and nationwide. But, I learned more in just one lesson from Kazuko than all 100 classes combined from other teachers.” – a quote from one of Kazuko’s students.

“I attended a Visiting Professor seminar in a western state. Professor wanted to teach the Kakitsubata (Japanese Iris) arrangement. After a lecture from the professor, no one else in the class was able to arrange Kakitsubata the way he wanted students to do. But, when the professor walked around the class room in disappointment and came to my table, he screamd Oh, you know it! and was delighted. Obviously, I was the only student in the class who could follow what the professor was trying to teach because I had several lessons of the Kakitsubata arrangement in Kazuko’s class before.” – a quote from one of Kazuko’s students.

It is Kazuko’s mission to teach her students at the same level taught in a class in Japan, rather than a very, very relaxed standard outside Japan which emphasizes on the MINIMUM number of lessons attended and the personal enjoyment rather than the technical competency and the understanding of Ikenobo’s core philosophy. (Japanese students in Japan normally attend twice more classes than American students to receive their next certificates.) Some of Ikenobo certificates received in outside Japan are not seriously recognized at their face values from any Japanese Ikenobo members. But, she wants to bring her students to be as competitive and qualified in techniques as Japanese students in Japan, and hopefully her students will stand out in a class by a Visiting Japanese professor. 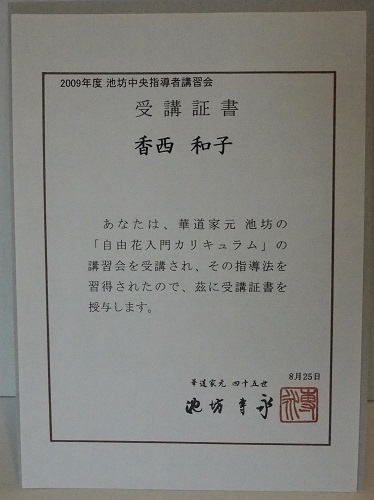 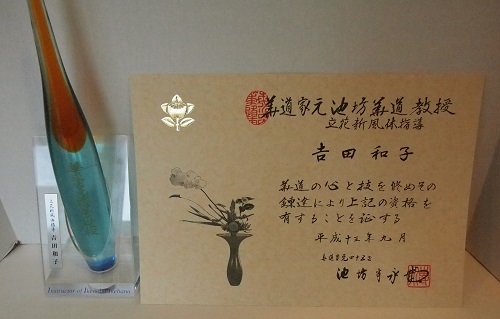 Kazuko’s Certificate-level Name Plate (Sekisatsu):
The Seal at the upper-right corner indicates that she attended and graduated from Ikenobo Central Training Institute

in Kyoto, Japan.
This seal certifies that its holder has received the highest possible education and training as an Ikenobo Teacher.
The Seal at the lower-left corner indicates that she is certified to teach the Rikka Shimputai. 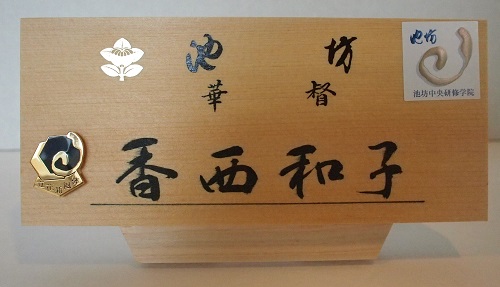